Call Us Anytime [at]

Let Us Manage Your Rental Property

Routine inspections are performed to help ensure your home is being cared for.

Tenants and owners have the convenience of easy online payments.

Monthly and year-end statements are sent showing all the activity on your account to keep you well informed.

The online portal allows you access to all lease documents, statements and copies of original invoices for any work performed.

Our leasing fee is just 50% of 1st month's rent and includes all advertising and MLS listing. You don't pay until the home is rented!

Rental price recommendation to help you get the highest rent in the least amount of time.

We advertise vigorously on top websites and the MLS.

Let’s face it… life is busy. We understand that and provide flexible showing schedules 7 days a week.

Applicants are thoroughly screened using credit, criminal history, eviction history and employment verification to make sure you get a fantastic tenant.

We'll handle all aspects of having the lease signed and we're there to inspect when tenant(s) moves in.

We use vendors that provide quality service at affordable prices. If you have a vendor you'd prefer, we're always happy to coordinate repairs with them.

We never charge a fee when your property is unoccupied! No fees are charged until we place a tenant.

If you change your mind about working with us, get a full refund of all management fees for up to 90 days.  Cancel anytime for free.

If you're not completely satisfied with our service then you're free to cancel at any time. Of course...we'd prefer to make you happy though.

Founded in 1810 St. Tammany Parish is referred to as part of the "Northshore" or "North Shore" throughout metropolitan New Orleans, owing to its location on Lake Pontchartrain. It is the most affluent parish in the state, has a nationally-recognized system of public schools, and is the most politically conservative parish in the New Orleans region. Clear streams, piney woods and idyllic communities filled with antique shops, galleries and restaurants are found throughout St. Tammany Parish, on the north shore of Lake Pontchartrain. Only forty minutes from the French Quarter in New Orleans, revel in Northshore art, cuisine, culture and the great outdoors. There are about 80,000 acres of national wildlife refuge set aside in the parish, including Big Branch National Wildlife Refugee and the Northlake Nature Center on Bayou Castine. Birdwatching is popular on the Northshore, and many endangered red-cockaded woodpeckers live here. The Tammany Trace, a jewel of a bike trail threading through 31 miles of St. Tammany Parish, the trace runs on what is an old railway system that dates back to 1885. This bike path connects Slidell all the way to Covington and is a great way to enjoy the Northshore outdoors. Kayakers, paddle-boarders, and canoeists find easy access along many of the bayous and rivers and on Lake Pontchartrain. Join a guided swamp tour of the pristine Honey Island Swamp in Slidell, or go fishing with one of over a dozen experienced charter captains in Slidell. Learn more about paddling in Louisiana. 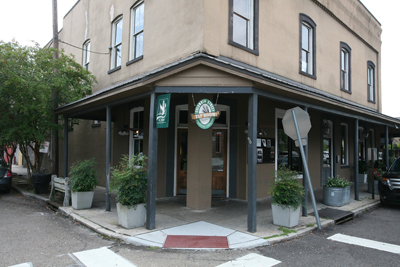